Every summer, up to one in five people in Britain are affected by hay fever. But what is hay fever?

If you’re not familiar with hay fever, or you have some symptoms that you think might be hay fever, then you may want to know more about this common condition.

We’ve created this short guide to give you some helpful information about hay fever and answer any questions you may have about this common condition.

In the guide below, we’ll be answering questions about hay fever, such as what it is and why it happens. We’ll also be looking at some of the main symptoms of hay fever, including itchy eyes, hay fever cough, wheezing and more.

Read on to find out more, or visit the hay fever medication section on our website to find out everything you need to know about hay fever and how to treat it.

What is hay fever?

This allergic reaction typically affects the nasal passages and eyes, causing irritation and inflammation of the cells in these areas, including the mouth, nose, eyes and throat.

The irritation caused by the body’s reaction results in symptoms such as:

Symptoms of hay fever generally start to occur when the pollen count is high — that is, the number of pollen grains per cubic metre of air is over a certain number. This means that sufferers are more affected in the spring and summer months.

Although some of the symptoms are similar, there are a few ways you can tell whether you have hay fever or a cold.

Firstly, hay fever is usually worse in the spring and summer, while cold season is generally in the wintertime. Hay fever may also get worse when it's warm, humid and windy (due to the increased pollen count), while weather won’t affect a cold.

Secondly, hay fever can last for weeks or months — as long as the pollen count is high and you are exposed to pollen. A cold will generally last between a few days and a week.

Can you develop hay fever suddenly?

Although hay fever usually develops during childhood, you can develop hay fever at any point during your life.

Sometimes this may be sudden or unexpected — some adults even develop hay fever as late as their seventies.

Some people may find that they have no experience of hay fever throughout their lives; others may suddenly develop it one summer. Hay fever sufferers might also find that some years they don’t experience any hay fever symptoms at all, while in other years they suffer from severe hay fever.

It's unclear what triggers hay fever to develop or what causes the immune system to react in this way, but there are several factors that can increase your risk of developing hay fever (such as genetics, having asthma or other allergic conditions).

Can hay fever kill you?

Hay fever cannot kill you and does not pose a serious threat to your health. Most people find it an inconvenience.

However, hay fever can negatively impact a person's quality of life. People who suffer from very severe hay fever symptoms can find that the condition hugely affects their day-to-day life for months at a time, disrupting their productivity at work or school, causing sleep problems, and affecting their mental wellbeing as well as physical health.

Hay fever is often an inherited trait, which means it is genetically determined.

This means that hay fever tends to run in families, and the likelihood of developing allergies like hay fever increases if someone in your family (like a parent) has them.

One of the most common symptoms of hay fever is coughing and sneezing.

A hay fever cough is caused by postnasal drip. This is when allergens — like pollen — irritate the lining of your nose, which causes your body to produce mucus to try and remove these irritations from your nasal passages.

This mucus then drips down the throat from the back of the nose, tickling the throat and creating the hay fever cough.

Hay fever can also worsen symptoms of asthma such as coughing, so if you are asthmatic then you may notice that your cough gets worse during the summer months.

Hay fever can affect the eyes, causing them to become red, inflamed, itchy, watery, or sore. As well as being uncomfortable and irritating, hay fever eyes can even affect your daily life and impact your vision.

Hay fever eyes occur when pollen floating about in the air comes into contact with the eyes, causing them to become inflamed, itchy and sore. Your eyes may also start watering — this is your body’s way of trying to remove the pollen and stop the irritation.

If you want to know how to stop hay fever eyes, there are a few things you can do.

First, wear sunglasses (preferably wraparound) to protect your eyes from airborne pollen. You can also dab a thin layer of petroleum jelly around your eyes to ‘catch’ pollen.

If this doesn’t seem to be working, try rinsing your eyes with cold water or using eye drops like Opticrom 2% Eye Drops which can provide quick relief from hay fever symptoms.

Hay fever rash is one of the less common symptoms of hay fever. It is caused by pollen from plants landing on the skin.

A hay fever rash can cause the skin to become itchy, red and inflamed. It may also cause blotchy red patches or eruptions on the skin. These look more like welts rather than bumps and can appear raised or swollen.

Hay fever can sometimes cause an itchy or sore throat. This is a more severe form of hay fever and can be particularly uncomfortable.

Hay fever sore throat is caused by pollen being inhaled, which irritates the cells in the throat. The postnasal drip that we mentioned above can also contribute to an itchy throat as well as a hay fever cough.

If one of your hay fever symptoms is a sore throat, there are a few things you can do to relieve it. Drinking plenty of fluids can help to keep your throat moist and alleviate itching, as can making a hot tea with honey, lemon and ginger.

However, if your hay fever sore throat doesn’t go away, then you may need a medication like Loratadine, Desloratadine or Telfast.

Hay fever wheezing is more unusual; you aren’t likely to wheeze from hay fever if you don’t have any other underlying health conditions or illness.

If you have asthma, then you may notice that your asthma symptoms get worse when you have hay fever, and wheezing can be one of these.

If this is the case for you, then speak to your doctor; they may recommend a preventer inhaler to reduce sensitivity and swelling in your airways, which will help with wheezing and coughing.

A blocked nose from hay fever is very common. Unfortunately, it is common to feel like your nose is blocked and runny at the same time.

Like the hay fever cough, a blocked nose is caused by pollen irritating the nasal passages, which causes cells to produce mucus to remove these irritations from the body. This allergic reaction also causes the nasal passages to become inflamed, which means the nose becomes blocked.

For more information on Avamys side effects or, to find out what dose you require, head over to our Avamys dose amount guide.

Hay fever usually develops during childhood, but you can develop hay fever at any point during your life. It is often genetic.

Hay fever symptoms can be irritating and sometimes severe, but fortunately, there are many different types of hay fever treatments available. 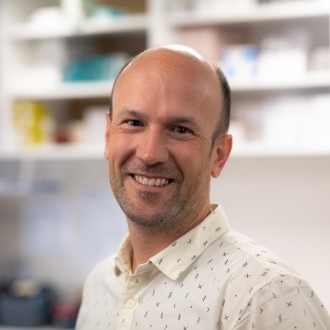 Steve is an expert clinical pharmacist that has recently added prescribing to his repertoire.

Ruari has worked in all sectors of pharmacy and is one of the most experienced Pharmacist Independent Prescribers in the UK.