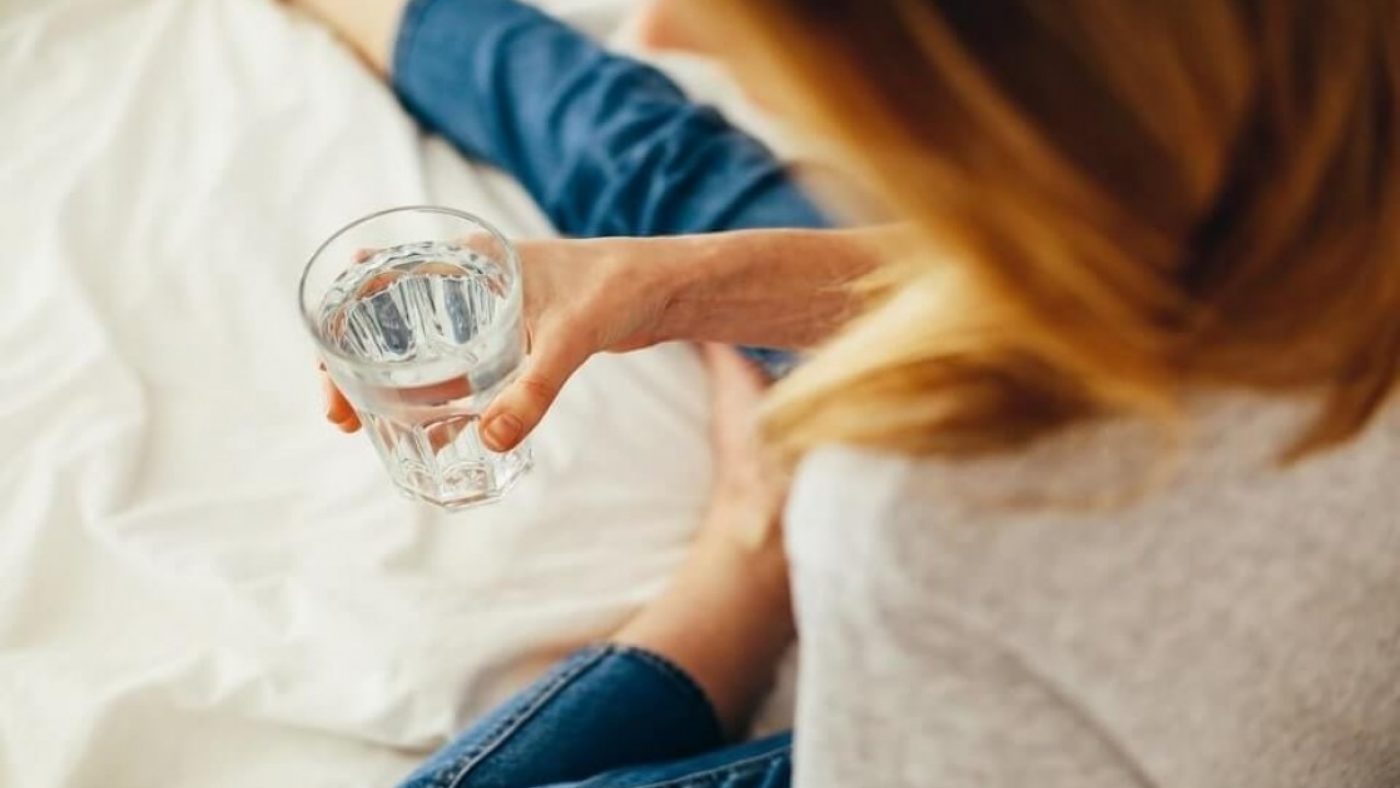 During the menopause, the natural changes in hormone levels can cause severe, life-altering side effects. HRT (hormone replacement therapy) treatments such as Kliofem can prevent and alleviate distressing menopausal symptoms. But are there any Kliofem side effects that you need to know about before you start?

Kliofem side effects are relatively unusual and not normally severe, but it’s always worth learning more about what you can expect before starting any new medication.

In this article, we’ll be looking at the possible side effects of this medication, including Kliofem HRT bleeding, Kliofem depression, withdrawal symptoms, and the suggested link between Kliofem and weight gain.

Read on to find out more (you can jump straight to the side effects here).

What is Kliofem used for?

Kliofem is a type of hormone replacement therapy (HRT) prescribed to women after menopause to relieve menopausal and postmenopausal symptoms. It works by replacing the oestrogen no longer produced by the body.

Kliofem is used to treat the symptoms of postmenopausal women who have not had a natural period for at least 12 months. It is not intended for use by those who still have some sort of natural menstrual cycle or who have undergone a hysterectomy.

However, there is a chance that side effects may occur, especially in the first few weeks of treatment, and it’s a good idea to inform yourself of the potential adverse effects of any new medication.

Below is a summary list of the known Kliofem side effects:

As you can see, these side effects range from mild to more serious symptoms.

The more severe side effects of Kliofem are extremely rare; the majority of people that take this HRT will not experience any serious or harmful side effects at all.

If you are concerned about any persistent, severe or painful Kliofem side effects — or any possible side effects not listed above — then you should consult your doctor for further guidance.

To find out more about the experiences of real users with this HRT, you can go to our Kliofem customer reviews page.

More common side effects and symptoms

Below we have listed the more common side effects and symptoms that may occur as a result of taking Kliofem.

Very common side effects (which may affect more than 1 in 10 people):

Common side effects (which may affect up to 1 in 10 people):

These more common side effects tend to occur as your body adjusts to the changing hormone levels caused by these supplements — they will usually subside within the first few weeks to a month of using the treatment. Most of the common Kliofem side effects listed above do not need medical attention unless severe.

If any of the above side effects of Kliofem continue after the first three months of using the menopause medication, you should consult your GP so that this can be looked into.

Serious side effects and symptoms

More serious Kliofem side effects tend to be uncommon. However, there is a small risk they may occur, so it is a good idea to be aware of the symptoms to look out for.

Serious side effects and symptoms may include:

If you notice any signs or symptoms of the above, seek medical attention immediately.

Similarly, if you feel like your symptoms are dangerous, life-threatening, or you experience sudden chest pain or difficulty breathing, you should call emergency services.

It is important to review any HRT medication with your GP regularly.

Weight gain on Kliofem is listed as one of the more common Kliofem side effects, affecting up to 1 in 10 people who use the HRT tablets. Many women believe that taking HRT will make them put on weight.

However, it is worth noting that there is currently no clinical evidence to suggest that weight gain (or loss) is due to Kliofem, just like there is no evidence of other HRT treatments like Elleste Duet causing weight gain. Instead it is more likely the result of a natural part of the menopause.

You may put on some weight during the menopause, but this can happen regardless of whether you take HRT. Weight gain tends to happen as we age anyway, as a result of reduced activity, slowing metabolism and loss of muscle mass.

In fact, decreasing oestrogen levels during the menopause have been linked to weight gain. HRTs such as Kliofem counteract this oestrogen loss, which may help to increase a user’s metabolic rate and slow weight gain.

If you feel that Kliofem weight gain (or Kliofem weight loss) is something that is affecting you, then speak to your GP about your concerns; they may suggest changing to another HRT. They may also suggest lifestyle changes such as exercising regularly and maintaining a healthy diet.

Kliofem does not produce a monthly menstrual-like bleed; it is used to treat postmenopausal women who have not had a natural period for at least one year.

This is because Kliofem is a continuous combined HRT, meaning that each tablet in a pack contains both estradiol (a synthetic form of oestrogen) and norethisterone acetate (a synthetic form of progesterone) so that a dose of both hormones is taken daily for as long as your treatment continues.

This is unlike sequential HRT medications (also known as cyclical HRT) in which you alternate between two types of patches or tablets which release different hormones — mimicking the natural hormonal changes of the menstrual cycle. This means that you will experience a ‘withdrawal bleed’ each month which will be like having a period.

Sequential HRT is usually recommended to those who have started suffering from menopausal symptoms but still have some type of a menstrual cycle.

Kliofem HRT bleeding is still listed as a common side effect of taking the medication.

This generally refers to the first few months of treatment, during which you may experience spotting or breakthrough bleeding. This happens because your body is getting used to the new levels of hormones being supplemented by the HRT.

A missed dose may also increase the likelihood of breakthrough bleeding.

Kliofem bleeding is not normally anything to worry about, and these side effects should subside within the first few months of taking the HRT.

If bleeding continues after this time, bleeding unexpectedly starts after you have been taking Kliofem for more than six months, or you experience bleeding after stopping treatment, you should consult your doctor.

Taking Kliofem if you still have periods

Kliofem is not suitable to take if you still have periods.

The medicine is prescribed to women whose natural periods have stopped for more than a year and who have not undergone a hysterectomy.

A large study in Denmark looked at the HRT use and drinking habits of over 5,000 women, finding that:

Further research needs to be done to better understand the risks from combining HRT such as Kliofem and alcohol.

If you are concerned about Kliofem and alcohol consumption, you should speak to your doctor. They may suggest limiting your alcohol intake while taking HRT or even stopping.

Kliofem hair loss is extremely unusual and it is an uncommon side effect of the HRT.

However, a very small number of users have reported that HRT has exacerbated their hair loss, so we cannot completely disregard this as a possible adverse side effect of using Kliofem. Additionally, abnormal (male pattern) hair growth — such as hair growth on the face — is another possible side effect of Kliofem, though this is usually caused by too-high levels of progestogen.

Generally, though, the oestrogen supplement used in HRTs such as Kliofem is thought to slow and alleviate female hair loss caused by the natural drop in oestrogen levels during menopause.

Kliofem and depression are sometimes linked. Depression is listed as one of the common Kliofem side effects, which means it may affect up to 1 in 10 and 1 in 100 users. This may be experienced as a new depression or a worsening of your existing depression.

Depression from HRT use is associated with the progestogen element of the medication; in this case, norethisterone acetate, which is used in Kliofem tablets.

However, it is worth noting that women going through menopause are at higher risk of depression and that HRT may protect against depression.

If you are worried about Kliofem and depression, these are some of the symptoms of depression to look out for:

Usually, any psychological side effects like mood swings and extreme moods from Kliofem should pass within a few weeks as your body gets used to these new hormone levels.

If these feelings do not subside or feel severe, then you should speak to your GP. They may suggest switching to a different type of HRT or lowering your dose to counteract these effects.

Similarly, if you have a history of depression, you should inform your doctor before you start any HRT — they will advise you on how best to proceed.

Most women stop taking HRT once their menopausal symptoms of the menopause pass. On average, women will experience symptoms for about four years as the sex hormone levels steadily decline.

During your time using Kliofem, your body may have become dependent on the hormones supplemented by the HRT. This means that if you stop taking Kliofem suddenly, you may experience Kliofem withdrawal symptoms.

These will present themselves as menopause symptoms or the side effects we’ve listed above, which can be unpleasant and distressing.

This is why it is generally advised by doctors to gradually decrease your hormone dose and wean yourself off your HRT, preventing menopausal symptoms from coming back in the short-term.

It is important to discuss the best way to come off your HRT medication with your GP. They will be able to advise you depending on your HRT, the dosage, the length you’ve been taking it, and the severity of your menopausal symptoms.

If you experience recurring or severe withdrawal symptoms after you have finished your course of Kliofem, then you should consult your GP.

Kliofem does not produce a monthly bleed and is used to treat postmenopausal women who have not had a natural period for at least one year.

Although this HRT has some known and common side effects, these are usually mild and tend to subside within the first few weeks to months of starting your course of treatment as your body gets used to the hormone supplements.

If you notice any possible Kliofem side effects lasting for longer than a few months, or you are worried about anything that we’ve mentioned above, it’s a good idea to chat to your doctor or pharmacist for advice on how to proceed.

And if you think Kliofem may be the right menopause treatment for you, you can buy Kliofem from The Independent Pharmacy. You just need to complete a short, online consultation; it’s free and easy to do, and one of our qualified prescribers can issue your HRT treatment for next day delivery.

Post menopause symptoms & treatments: everything you need to know

Migraines And Menopause: Are They Linked?

Signs Of Perimenopause: The Symptoms & Facts You Need To Know

Chris Newbury first joined The Independent Pharmacy as a Pharmacist Independent Prescriber in 2014 and has had an instrumental role in growing the service in the years since.