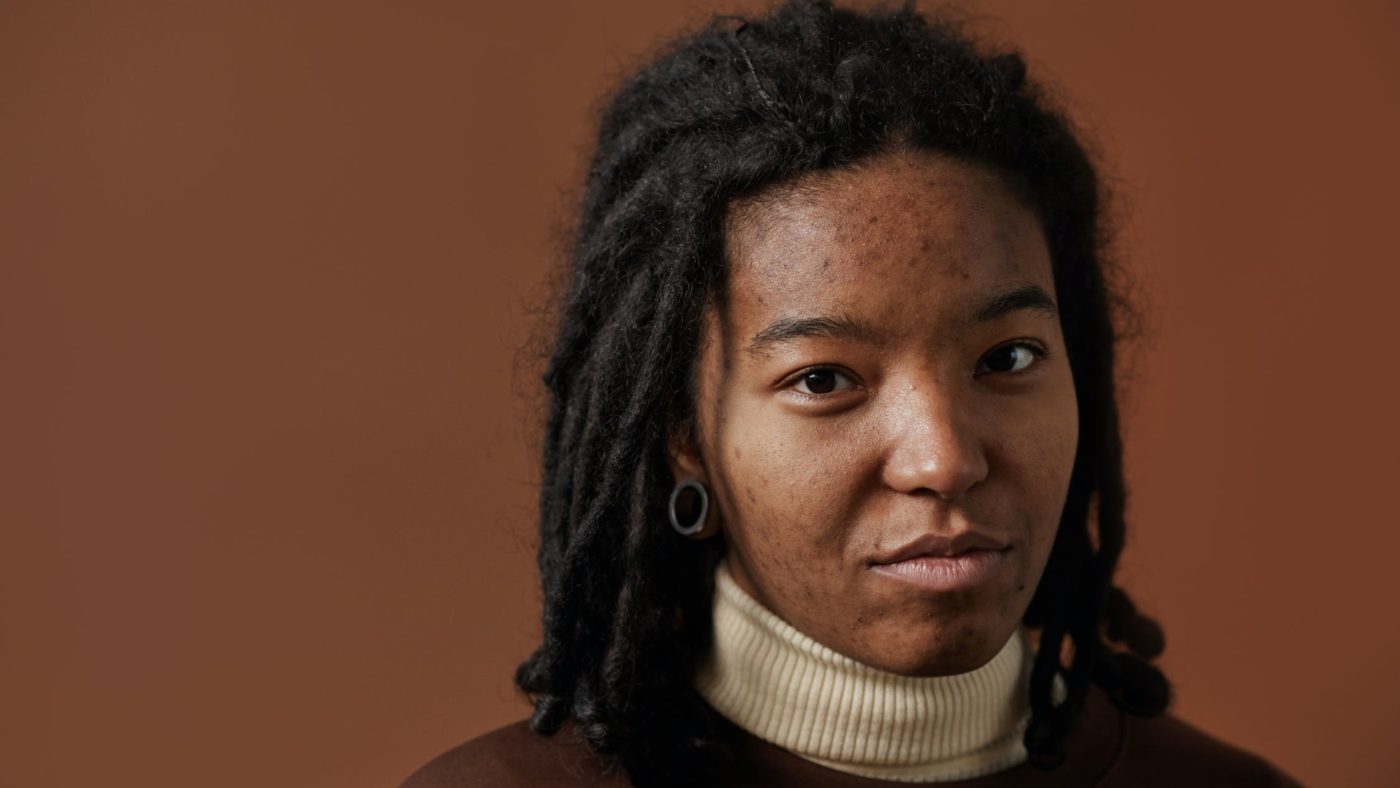 Acne can have a number of unwanted consequences, including scarring long after your breakout has subsided. In fact, there are a number of different types of acne scarring. You may have heard of some of these, such as keloid scars.

Click through to our dedicated page that discusses what causes acne and how to prevent it. You can also take a look at our in depth acne guides for more information about the condition and the different acne treatments available.

Some people with acne won’t experience any acne scars developing at all. However, many people do.

Scarring may occur for a number of different reasons, such as the sufferer picking their spots, infections, or as a result of the skin’s natural healing process. Most commonly, it happens because severe types of spots (nodules and cysts) burst and damage surrounding skin.

Here are the five most common types of acne scars:

These different types of scars can be split into two main categories:

In the sections below, we’ll be taking a closer look at these different types of acne scars — including what causes them, what they look like, and how to get rid of them.

You can find more general information on how to get rid of acne scars here (including the best acne treatments for scars and alternative home remedies).

Keloid scars (or keloids) are a type of hypertrophic scar, which means they are caused by excessive growth of thick scar tissue, creating raised lumps.

Unlike typical hypertrophic scars, which are the same size as the acne that caused them, keloid scars spread beyond the original damaged area of skin.

As well as being raised, a keloid scar can be pink, red, skin-coloured or darker than the surrounding skin. Keloid scars are also normally shiny (though they may be bumpy), hairless, hard and rubbery. They may fade in colour over time, going from red or purple in appearance to brown or pale in colour.

We don’t know exactly what causes keloid scars, but it is thought to be a result of the body trying to heal itself post-inflammation, causing an overproduction of collagen (the skin's protein).

Keloid scars can appear anywhere on the body but they are more common in areas such as the chest, back, shoulders, jawline and earlobes. They are also more common in people with darker skin.

How to get rid of keloid scars

There are a few different types of keloid scars treatment:

These treatments tend to work towards flattening the keloid scar, rather than getting rid of it completely.

Alternatively, laser treatment may be used to reduce the appearance and redness of the scar (though this won’t flatten the scar).

Surgery is sometimes used to remove keloid scars, but there is a risk that the keloid will come back (and potentially become even bigger).

Ice pick scars are atrophic scars, an indented scar that heals below the normal layer of skin tissue, caused by a loss of tissue.

Ice pick scars are narrow, deep holes in the surface of your skin. The best way to describe ice pick scars is that they look like the skin has been punctured with a sharp object like a needle.

Ice pick acne scars are usually the result of cystic acne — the most serious type of acne which causes deep cysts and incredibly painful pimples. Ice pick scars can develop after an infection from a cyst; the skin tissue is destroyed, leaving a long, narrow scar that goes deep in the skin.

How to get rid of ice pick scars

Ice pick scars tend to be very tricky to treat and often require persistent and aggressive treatment. However, it’s not impossible and there are multiple different treatments that may work to remove these acne scars.

These are the types of ice pick scars treatment available:

Hypertrophic scars are very similar to keloid scars: they occur when scar tissue builds up from acne.

However, hypertrophic scars are the same size as the acne that caused them. Not as much collagen is produced in hypertrophic acne scars in comparison to keloids, which means that they don’t extend beyond the boundaries of the original acne spot.

Hypertrophic scars are raised and firm in appearance. They are usually red to start with but tend to become flatter and paler over time.

Hypertrophic acne scars are more common in areas such as the chest, back (take a look at our guide on how to get rid of back acne), shoulders, neck and face.

How to get rid of hypertrophic scars

Most hypertrophic scars will gradually become paler and flatter over time, reducing in appearance.

Hypertrophic and keloid scars are generally treated in a similar way:

These treatments can help to flatten the hypertrophic scar and reduce the appearance.

Another type of atrophic scar, boxcar scars are round, oval or ‘box-like’ craters in the skin. These depressions are usually broader and more shallow compared to ice pick scars. However, they have sharper, jagged edges (unlike rolling scars, which we will come onto next).

Boxcar acne scars tend to be a result of inflammatory acne (red, inflamed and irritated spots). They occur when a breakout destroys the collagen in the skin, which leaves the skin without enough support, creating a depressed area.

Boxcar scars normally form in areas where the skin is relatively thick, such as the lower cheeks and jawline.

How to get rid of boxcar scars

There are a few different options when it comes to boxcar scars treatment:

Rolling acne scars have smooth sloping edges and are normally more shallow than other types of atrophic scars. This gives the surface of the skin a rolling or wave-like uneven appearance.

Rolling scars are usually a result of long-term inflammatory acne. This type of scarring is caused by bands of scar tissue that form underneath the skin. These bands pull the epidermis — the top layer of skin — giving the skin a rolling and uneven texture.

This type of acne scar can become more obvious or severe as you get older (this is because your skin loses its natural elasticity and tightness).

How to get rid of rolling scars

There are a few rolling scars treatment options that you can try to get rid of this type of acne scar:

Post-inflammatory hyperpigmentation can happen naturally as part of the skin’s healing process after inflammation caused by acne.

Hyperpigmentation isn’t a true type of acne scar — it’s a patch of skin that is darker or discoloured. With hyperpigmentation, the affected area is flat (neither raised or pitted). It can also range in colour from pink to red, purple, brown, or black, depending on skin type.

It can happen as a result of more severe acne or the sufferer picking spots. As the skin heals, it produces too much melanin (the pigment that gives skin its colour) which leaves a darker area.

How to get rid of post-inflammatory hyperpigmentation

In the majority of cases, post-inflammatory hyperpigmentation doesn’t need to be treated — it often fades and disappears on its own over time.

However, if you want to speed up the process, there are a few post-inflammatory hyperpigmentation treatments you can try:

Some of these treatments are available over the counter and some will need a prescription.

Acne scars can be an upsetting and long-lasting complication of acne.

There are a few different types of acne scars, which can be split into two main categories: atrophic scars (depressions caused by a loss of skin tissue) and hypertrophic scars (raised lumps of scar tissue caused by excessive tissue growth).

There are different ways to treat these types of acne scars, but treatment can be difficult for certain types (in particular, keloid scars) and it isn’t always successful. However, many people do have success getting rid of acne scars using either medical treatments or natural home remedies.

Treating acne in the first place will reduce the likelihood of acne scars appearing. There are many treatment options available at The Independent Pharmacy that can be used to prevent or get rid of acne, including topical and oral treatments. The treatment that is most appropriate for you will vary dependent on the severity and type of acne.

The Independent Pharmacy offers a range of acne treatments such as Duac Gel, Skinoren Cream, Tetralysal Capsules and Acnecide Gel. Start your free online consultation today to find out which treatment is best for you.

Zineryt Reviews: What You Need To Know About The Acne Lotion

How To Get Rid Of Back Acne: What You Need To Know

Oxytetracycline Side Effects: What You Need To Know About This Acne Treatment

Steve is the newest member of The Independent Pharmacy medical team. He is an experienced pharmacist who brings a new perspective to our prescribing team.